The Good, the Bad, and the Ugly of Early-Onset Alzheimer’s Disease 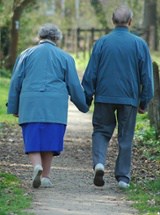 Early-onset Alzheimer’s disease, though similar in many ways to regular onset, has a few differences. For one, it can take effect much faster than regular Alzheimer’s, and, of course, it strikes people much younger. For anyone who has recently been disagnosed with early-onset Alzheimer’s or knows someone who was, you’ve undoubtly got a million questions. Because Alzheimer’s affects people differently and people react in different ways, many times the answer is “I don’t know,” or “You’ll just have to wait and see.”

As vague as this response is, it doesn’t mean you can’t prepare yourself for possible eventualities and different circumstances. Joining an Alzheimer’s disease and dementia support group and connecting with other Alzheimer’s patients or caregivers can give you a better idea of what might lie ahead and help you find the resources you need.

The following excerpt is from an article from Phoeniz, Arizona, about a woman with early-onset Alzheimer’s disease, and her and her husbands path as they navigated their new life. To read the complete article, click here.

Donna Baker just turned 50, and she can’t remember how to tie her shoes.

It is the least of her worries.

“As frustrated and annoyed as I get now that I can’t tie my shoes, I think that in five years someone might need to feed me, and then it doesn’t seem so important,” she says.

Two years ago, at 48, Donna was diagnosed with early-onset Alzheimer’s disease, which, despite all the studies, is still a mystery in many ways. Spouses and children, along with doctors and caregivers, watch their loved ones decline for years, wondering whether they know what they have forgotten, or whether they are suffering or sad.

Donna knows those answers and wants to explain. She has a precious window of time, partway between the Donna she used to be and the Donna who won’t remember her. She wants to tell her story while she still knows it is hers.

There isn’t much time.

Already, in a restaurant, she can’t always find her way from the restroom back to the table.

She tried holding tight to the whip-smart Donna who spent 20 years in banking, handling as many as 10 mortgage loans a day, the paperwork inches thick, but today Donna can’t add a column of numbers.

The Donna who loved to read, often finishing a book in a day, has faded, too, leaving a shelf of books unread, and the Donna who’s here now can’t follow three paragraphs into a novel.

Donna always knew her own mind, and yet she is helpless to keep it from dissolving.

“People have to pay attention. It’s not an old person’s disease. It destroys who you are and everyone around you,” she says. “It kind of takes away everything that makes you you. I am losing my life with my husband. He’s losing me a little at a time.”

“It changes by the day,” he says. “She’ll get up one day and she can’t do something she could do the day before. And that’s tough to watch, and then she may be fine for three months. It’s just really hard to watch her struggle through all this.”

There is little they can do. Doctors don’t have a real understanding of how Alzheimer’s occurs, or why. There is no preventing it and no stopping it. After three decades of research and hundreds of drug trials, only a handful of medicines are available — and those don’t actually slow the progression of the disease, which continues its assault on the brain; they only temper some of the dementia symptoms for a while.

The only consolation, Donna says, is that “it is slow.”

“I don’t think it is so slow,” Nick interjects softly, and looks down at the tablecloth, tears in his eyes. His wife wraps her arms around him.

What have been your experiences with Alzheimer’s disease? What advice or recommendations would you make to people in similar situations? We’d love to read your comments below.